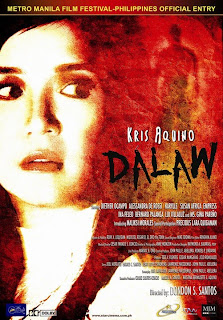 Even if it is not entirely original, Feng Shui (2004) is one of the better Pinoy horror films of the last decade. In an industry that adheres to formula, it is not surprising that director Chito Roño and lead star Kris Aquino teamed up for the second time with Sukob(2006). It is still scary in its own right, but it did not match the chills and thrills of Feng Shui. But in terms of box office receipts, Sukob grossed more than its predecessor.

This 2010, Kris returns with her third horror film in seven years. Dalaw is helmed by Dondon Santos who also directed the movie Noy (starring Coco Martin) and the TV series Kung Tayo’y Magkakalayo. Can Dalaw match the success of Feng Shui and Sukob?

When Stella (Kris Aquino) decided to marry her old flame Anton (Diether Ocampo), she starts having nightmares about her deceased husband Danilo (Richard Quan). After their wedding, she sells her posh urban home and moves to Anton’s old family house together with her son Paolo (Maliksi Morales). Her nightmares turn into hauntings. She suspects that her abusive husband is coming back from the afterlife to pay her a visit. But the supernatural visitor is not content with merely making its presence felt, it is starting to become violent. Stella must protect herself and her loved ones from the vengeful ghost before it is too late.

Like many Pinoy horror films that preceded it, Dalaw assumes that moviegoers are impatient so they try to scare the audience every single chance they get. So right at the very first scene, we see Stella being haunted by a shadowy creature. That scene ends with Stella screaming her lungs out and waking up. It’s just a dream! Surprise, surprise. With no real threat to latch onto, the first act is filled with nightmare scenes and jump scares. Unfortunately, the jump scares will not make you jump on your seat due to dull sound effects and poor timing.

The people behind Dalaw must understand that effective horror films are patient. They take their precious time in setting the plot and developing the characters. Once the audience is acquainted with the characters, they set the mood and build the tension. The production design and musical score help in creating an atmosphere that is filled with dread and suspense. It keeps the audience on their toes while waiting for a ghost to appear or something horrid to happen. It’s a slow build-up, but it works effectively.

Stella is resilient and loving, but is plagued by guilt and fear–she feels guilty that she remarries and feels afraid that her ex-husband will be mad that she has moved on with her life. Kris’ performance is not exactly what you can call award-winning, but it is good enough.. On the sidelines is a reliable supporting cast, composed of: Alessandra de Rossi as Trina, the tactless cousin; Ina Feleo as Kylie, the supportive other cousin; Karylle as Lorna, Anton’s ex-girlfriend; Susan Africa as Milagros, Anton’s mother; and Gina Pareño as Manang Olga, the one-eyed kasambahay who can see ghosts.

Manang Olga imparts advice as fast as she quotes movie lines. She quotes lines from Palimos ng Pag-ibig, Relasyon, and other films of Vilma Santos. This is used for comedic effect, but came across as lame. It somewhat destroyed the mood the film is operating on. If it’s a kitschy or campy horror film like Shake, Rattle, and Roll, the humor may have worked.

Dalaw may fall short in other aspects, but it is never boring. The fast pacing of the movie doesn't allow the audience to catch their breath. It's like a rollercoaster ride that pulled out all the stops. The climax cuts from Stella and her duel with the vengeful ghost to Anton and his attempt to bless the malevolent spirit's body. The editing is slick in intertwining Stella and Anton's individual efforts in putting the unwanted visitor back to its resting place.

In the last 20 minutes of the film, a twist is revealed. For moviegoers who paid attention, they will probably see it coming. It’s a nice touch, actually. It provides context to some scenes that felt incomplete or did not quite made sense. The reveal is a little less spectacular though, since Manang Olga practically gave the twist away two scenes earlier.

Dalaw is my least favorite Kris Aquino horror film. But given the insatiable appetite of Pinoys for a good scare, it will surely find an audience. Hence, it's possible that it will do just as well in the box office.

i wasn't able to watch feng shui, but i did enjoy sukob. imeethinks i'll watch dalaw for this film fest teehee

Feng Shui and Sukob were a lot better than Dalaw. Dalaw doesn't have a single scary moment.