Slow Fade: A Celebration of Life 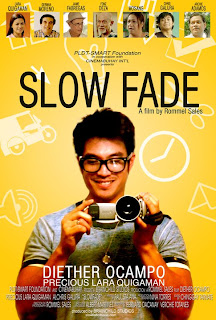 At the risk of sounding morbid, I think death is a beautiful thing. It may be the end of life, but it also opens doors for new beginnings. It works as miraculously as life itself. When death is imminent, people are forced to reflect on the things they have done and could have done. Slow Fade, likewise, finds beauty in death. It chronicles a man’s examination of his life. He makes the most out of his remaining days as he fulfills a life-long ambition and leaves a legacy to his future child.

Darius (Diether Ocampo) can’t get his videocam out of fiancée Tere (Precious Lara Quigaman). He is shooting the prenuptial video for their upcoming wedding–the first video he has done in years. His college videos, according to him, were compared by his professors to the works of Ishmael Bernal and Lino Brocka. However, he did not pursue filmmaking. At present, he edits videos for weddings, baptisms, and burials in his shop aptly named KBL Media House. KBL is an acronym for kasal, binyag, at libing.

Darius soon receives two surprises that will make him happy and devastated at the same time. Tere is pregnant with their first child. This news would have immensely delighted him if not for the second surprise. He has a brain tumor with only six months left on the calendar. It crushes his heart to think that his child will never get to meet him. He decided to put his latent filmmaking skills to good use. Through a series of videos, which is later edited into a film, Darius introduces himself and his town to his unborn child.

We have a fair share of movie characters that are still making the most out of life despite being terminally-ill. But unlike them, Darius does not have a wish list before he “kicks the bucket”. He doesn’t want to fly over the North Pole or be buried on the mountain. His ambition is more modest and realistic. He wants his unborn child to get to know him and the community he grew up in through his perspective. The once aspiring filmmaker turned video editor rediscovers his passion for filmmaking. The finished product is both a love letter for the child he would never meet and a tribute to San Pablo City . It helps that Rommel Sales, the film’s director and director of photography, is a prolific cinematographer. He gorgeously captures the small town charm and irresistible beauty of San Pablo City in rich and vivid hues. Direk Rommel has won the Best Cinematography award in this year’s Cinemalaya for his work in The Leaving.

Despite having a character who is about to die, Slow Fade keeps things light. Direk Rommel channels Michel Gondry (The Science of Sleep) to show us the cut-and-paste wonderland that thrives in Darius’ subconscious. The quirky editing and scoring helps brighten up the film further. I just wish the drama is downplayed a bit more. There are scenes especially in the first act wherein Darius wallows in grief repeatedly. It’s understandable that he is depressed. He is about to die, for crying out loud. But the repetitive crying scenes put momentary snags on the overall lightness of the film.

Slow Fade is a man’s journey to fulfill a dream he has given up long ago. It celebrates life and trades escapism for practicality to show us that even the simplest things in life can bring us happiness. It is charming, inventive, and crowd-pleasing. It is the type of independently produced production that has a mainstream appeal with enough indie sensibility to back it up.

Slow Fade was chosen as one of the five indie films competing for a P100,000 prize in the 2010 Metro Manila Film Festival. Each competing indie film had a one-night premiere screening at Robinsons Galleria from December 16 to 20, 2010. Written by Paul Sta. Ana, this indie film is funded by PLDT-SMART Foundation and Albert Martinez's Cinemabuhay.