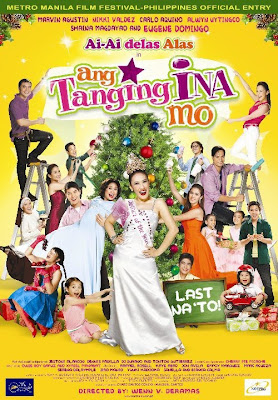 Before Ang Tanging Ina evolves into yet another never-ending franchise, Star Cinema bids farewell to the single mother of twelve with Ang Tanging Ina Mo (Last Na ‘To). In this third and final installment, Ina Montecillo (Ai Ai delas Alas) finds out that she is terminally ill and is left with only a few months left to live. As Ina struggles to tell her family about her condition, her children also struggle to get along.

Aside from Ina’s health problems, the rest of the cast have their own conflicts to deal with. Rowena (Eugene Domingo) is caught in a May-December love affair with Frank (Jon Avila). Severina (Shaina Magdayao) is marrying a taong hito. Juan’s (Marvin Agustin) debts are piling up. Tri (Carlo Aquino), who is better off, is reluctant to help. Tudis (Nikki Valdez) has marital problems. While Pip (Alwyn Uytingco) discovers that he has a daughter.

There are plenty of subplots brewing in the background. Some are interesting. The others? Not so much. Some of the conflicts are resolved, while others are seemingly forgotten about. With a brief running time, it’s impossible to explore each and every character’s subplot. It would have been better if they focused on the conflicts that are more interesting or entertaining. In my opinion, Severina and Tudis’ conflicts are dispensable. Hence, omitting them from the screenplay will not affect the overall arc of the narrative nor will it make the film less entertaining. By trimming down the story to its bare components, more time can be allocated for developing the more important subplots.

The performances are all aces. Ai Ai reminds us why she is the Comedy Queen. She is wacky, outrageous, and hysterical. She gives her all as the titular character. But aside from the mandatory gags, she bares her heart as the loving mother who isn’t ready to leave her family yet. In one of the film’s poignant moments, she chases Juan on a footbridge in frenzied fashion. She perfectly captures the emotions of a mother who terribly misses her firstborn.

Not to be outdone is Eugene . As Ai Ai’s sidekick, Eugene provides ample support without overshadowing her co-star. That’s what great supporting players do. The tandem of Ai Ai and Eugene is undeniable. Their comedic rhythm is impeccably in sync. Indeed, the acting awards bestowed on Ai Ai and Eugene are well deserved. (Note: Ai-Ai bagged the Best Actress trophy while Eugene was hailed as the Best Supporting Actress.)

The film’s breakout stars are Cecil Paz as Malena, the kasambahay and Xyriel Manabat as Monay, Pip’s daughter. Kasambahaysare used for comedic effect for as long as I can remember. The likes of Pokwang, Tuesday Vargas, and Moi Bien have excelled in this role. You can add Cecil to that list. She puts her own flavor to the staple character. She is deliriously funny when she provided “background music” to Ina’s dramatic moments. The clever use of April Boy Regino’s “Di Ko Kayang Tanggapin” is one of the film’s highlights.

Xyriel is the most charming performer in this film. She plays Monay with the innocence of a child and the wit of a grown-up. With an angelic face and undeniable charisma, she shifts effortlessly from comedy to drama. Here is a promising young star that I’m sure we will be seeing more of. (Note: Xyriel was awarded as the Best Child Performer.)

The fact that this is the last installment of Ang Tanging Ina makes me both sad and happy. It’s sad to say goodbye to Ina, Rowena, and the rest of the family–characters that I’ve come to know as if they are real people. There is a montage near the end of the film that shows scenes from the first movie. It’s interesting to see how far the characters have gone. In the first film, Ten-Ten (Yuuki Kadooka) is still a young boy in his diapers and he’s all grown up now.

On the other hand, I’m happy that this is the end of the franchise. I don’t want Ang Tanging Ina to suffer the same fate that befell the likes of Shake, Rattle, and Roll and Mano Po–franchises that continued way past their prime. These franchises turn into cash cows being milked dry by the studios that produce them. They may still be commercially viable, but the quality of the story suffers. There is only so much story that can be squeezed out from the same set of characters and studios have to know when to stop.

Ang Tanging Ina Mo (Last Na ‘To) ends the series in a high note. It may not have outdone the first movie, but it is a hell of an improvement from the drivel that is Ang Tanging Ina N’yong Lahat. It also reunites Ina with her three husbands (Tonton Gutierrez, Dennis Padilla, and Jestoni Alarcon) and 12 children (including Jiro Manio, Serena Dalrymple, and Mark Acueza).

Anchored by excellent performances, Ang Tanging Ina Mo (Last Na ‘To) is a crowd-pleasing family-oriented film that is funny as it is touching.

I haven't watched this one yet. I wanna see if it really is worth the award. Nice review,, by the way. :)

Thanks, Will. I won't say that it was deserving of the award, but it was funny and entertaining. That's good enough for me. (RPG should have won!)

My family hated the movie. The gags were stretched to the point where it becomes unfunny. Case in point: Marvin Agustin's 'mataas na position" job. It would have been funnier if they removed the whole "Ai Ai-can't-hold-her-bladder" thing after the scene where Marvin told Ai Ai of his new job.

No matter how much Ai Ai contorted her face, it just didn't work for us. And the only actors worth mentioning is Eugene Domingo, Marvin Agustin and Carlo Aquino. The rest is like 'meh'.