The Tale of Imelda’s Stolen Pair of Red Shoes 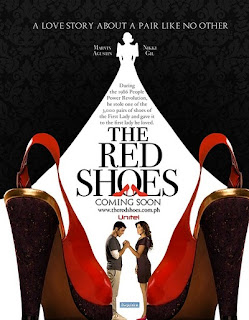 Imelda Marcos, the iconic First Lady of the martial law regime, is known for her flamboyant antics as much as her love affair with footwear. In fact, her extravagant shoe collection of 3,000 pairs landed her a spot in the Guinness Book of Records. One pair of shoes becomes the star of the first film of Unitel Productions in more than three years. This marks the film outfit's return to movie production after creating critically acclaimed films Inang Yaya, Santa Santita, and Crying Ladies.

The Red Shoes sidesteps from the Steel Butterfly’s larger-than-life persona. It refuses to sensationalize Imelda or depict her in a bad light. Instead, the film gives us a parallel story about stealing in the name of love using a pair of red shoes as a metaphor. When Malacañan was first opened to the public after the People Power Revolution, Lucas (Marvin Agustin) was one of the first to enter the President’s official residence. He couldn’t believe his eyes when he saw the First Lady’s infamous shoe collection. He stole a pair of red shoes and gave one shoe each to the “first ladies” of his life – his sweetheart Bettina (Nikki Gil) and his mom Chat (Liza Lorena).

Aside from the story of the red shoes, the film has other shoe stories to tell. The film shows the affinity of the different characters with their favorite shoe color and how that reflects their personality and perspective in life. Lucas likes to wear white sneakers, white Chucks, white sandals, anything white. He refuses to wear any other color. He also refuses to change and get out of his comfort zone. He clings on to his past dearly with no intention of moving on.

Meanwhile, Chat owns dozens of shoes but she doesn’t have a favorite pair or a favorite color. She is still looking… in the same way that she is still looking for answers why her beloved husband Domingo (Tirso Cruz) was suddenly claimed by the afterlife. Her husband was one of the unfortunate workers who got buried in quick drying cement when the scaffolding of the collapsed in 1981.Since his death, Chat has been trying to contact him through psychics and mediums. Her remaining hope is Madam Vange (Tessie Tomas), a crazed Imelda fanatic believed to be a powerful medium.

Aside from the focal stories of romance and family drama, The Red Shoes boasts of a rich back story as well. Scribe James Ladioray uses nonfiction elements from the martial law years as turning points of his story like the collapse of and ousting of President Ferdinand Marcos, thus making the story more believable and relatable.

This film may seem like Pinoy’s answer to 500 Days of Summer. But comparing it to the Zooey Deschanel and Joseph Gordon-Levitt romcom means we are disregarding the film’s political connotations and merely appreciating its cutesy, quirky ways. The film poses the question: would you steal for love? Even though Lucas has the purest intentions, he still committed an unlawful act. The filmmakers may be drawing a parallelism with what Ferdinand did to please the insatiable Imelda, but don’t quote me on that. Whether or not, director Raul Jorolan and writer James Ladioray have that intention is up to the viewers to interpret. The best thing about watching movies like this is that it leaves us with something to ponder on. It’s not just escapist entertainment that gets pushed at the back of our minds after the end credits rolled.

When I first heard about The Red Shoes, I got instantly hooked by its premise. A lot of films only look good on paper, but not this one. The high-flying concept, coupled with a commendable execution, gave us the first great Pinoy movie of 2010. Its screenplay is highly original, clever, and eloquent. It isn’t just a love story. It isn’t just a shoe story. It is every Filipino’s story. There is a Ferdinand and an Imelda in all of us. 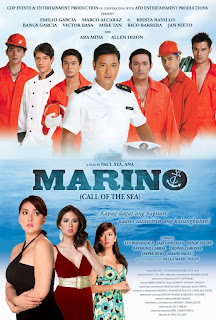 Marino, director Paul Sta. Ana’s sophomore effort after Huling Pasada (Cinemalaya 2008 finalist), dramatizes the longing that devours a couple when one decides to work as a seafarer.

Following the Diaspora of Filipino workers, Benjo (Allen Dizon) leaves his wife and daughter behind to become a seaman. He tries to overcome separation anxiety by watching family home videos over and over again. However, pixelated images cannot cure homesickness, only human warmth will suffice. And so, he commits an unfaithful act that puts his devotion to his wife to the test.

Back home, his wife Mina (Ara Mina) is dealing with her father’s failing health. As she copes with the situation, she starts to doubt her feelings for her husband. Will she wave the white flag or will she hold on to their commitment?

If I will include all the bit players and their respective stories in the plot I’ve written above, I would have typed 500 words in one go – that’s my biggest concern with Marino. Director Paul Sta. Ana and scribe Dennis Evangelista is guilty of overpopulating this story with too many characters. Is this bad habit talking? Or are the filmmakers just too keen on putting celebrities on screen regardless if their characters are significant or not?

In indie film standards, we can say that Marino has an all-star cast that includes Allen Dizon, Ara Mina, Emilio Garcia, Victor Basa, Rico Barrera, Marco Alcaraz, Jan Nieto, Krista Ranillo, Bangs Garcia, Mike Tan, Jaja Gonzales, Raymond Cabral, and Benjie Felipe. And so, the film haphazardly jumps from one character’s conflict to the next in order to parade its bevy of stars. We are introduced to numerous characters that aren’t given enough screen time to fully matter.

The filmmakers are just going through the motions. I can sense zero investment on character development and dramatic buildup. They are merely concerned on giving each actor and actress their fair share of the limelight. In fact, some of the characters are disposed at a whim. A perfect example is Emilio Garcia’s character. On the get-go, he is fashioned as the major supporting player. He is Benjo’s constant companion, confidante, and kumpare. He offers insightful advices and provocative discussions about being a seaman and a faithful husband. But after his character meets an accident, we never heard of him again.

Meanwhile, the affair between the characters of Rico Barrera and Raymond Cabral is totally uncalled for. I don’t see any significance of it to the central themes being explored. But the scenes are there anyway, just because the filmmakers think they would appeal to a particular demographic. Moreover, the roles of Bangs Garcia (Benjo’s ex-girlfriend), Marco Alcaraz (neighbor who secretly desires Mina), and Jan Nieto (Mina’s older brother) are likewise insignificant.

Despite its shortcomings in the storyline department, the production values can be compared to mainstream releases. They even shot some scenes in . Marino boasts of clear cinematography, decent production design (although it lacks authenticity), heavy musical score, and a heartrending theme song. Jan Nieto lends his vocals to the ballad "Bakit Kailangan Pang Lumayo?" penned by Ogie Alcasid.