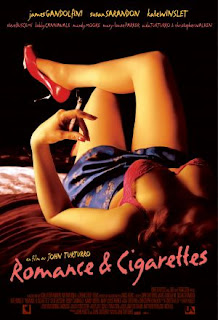 THE GIST: A comic musical starring a married man, his inamorata (AKA the bitch in heat), and his wacko familia.

STAR TRIBUNE SAYS: The film feels like a collision between a John Hughes teen comedy and a David Lynch freakfest.

I SAY: A hogwash hokum humbug of tomfoolery. But at least, it knows how to laugh at itself. And Kate should definitely do more comedies.