Amelia is MEANT to Soar 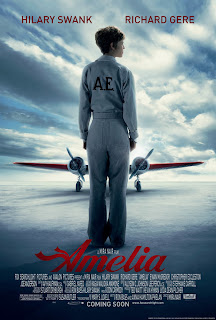 Although Amelia aspired to be an eagle flying over high clouds, the filmmaking involved is stuck on the ground. The screenplay’s frail little wings couldn’t hold the weight of the eponymous heroine. We see glimpses of the aviation legend, but the portrayal skips her depth and intensity.

Hilary Swank has proven herself as an outstanding actress with two golden statuettes to boot (one for her androgynous turn in Boys Don’t Cry and another one for the Clint Eastwood melodrama Million Dollar Baby). But for now, the esteemed actress has to be contented with her two Oscars. Amelia is unlikely to be her ticket for a third Academy award.

In this film, Amelia was portrayed as an insipid character who acts on a whim as if she is intoxicated by the whiff of her own stubbornness. With this characterization, it’s a mystery how she achieved celebrity status as the face of early American aviation – a mystery more puzzling than her enigmatic disappearance.

The narrative is flat, without climax or denouement. It’s such a shame that the life of Amelia Earhart is as exciting as watching blips on a radar.

Instead of watching Amelia, catch these following movies instead: