Most Controversial Films of the Decade

THE PASSION OF THE CHRIST (2004)
Directed by: Mel Gibson

A self-financed Biblical epic presented without a word of dialogue in English seemed to be quite a stretch for the guy who imitated the Three Stooges in the Lethal Weapon movies. But what caused an uproar was not the improbability of this movie, but the explicit violence and what some critics felt were anti-Semitic themes. All the talk didn't hurt the film, though, as it went on to became the highest grossing R-rated film of all time. 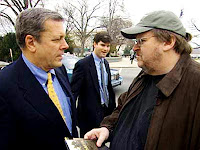 Released in the midst of the 2004 presidential election, Michael Moore's muckraking look at the lead-up to and aftermath of September 11th drew harsh words from people who saw the movie, people who refused to see it, and even people who were in it. An injured veteran who was interviewed sued Moore, but the case was dismissed. Moore's movie is still has the biggest box-office gross ever for a documentary.

Writer/producer/director/star Vincent Gallo fully expected his indie road movie to get people talking. You have to when you include a graphic sex act in your film. But he wasn't expecting that Roger Ebert would call it the worst premiere in Cannes Film Festival's history. In response, Gallo called Ebert a "fat pig" and put a curse on the critic's colon. Ebert replied getting a colonoscopy would be more enjoyable than the movie.

A rare gay love story with big name actors, this film sparked debate on both end of the cultural spectrum. Before it was even released, conservative pundits decried the subject matter, and it was pulled from a Utah theater just two hours before its first screening. But some activists also complained that the marketing covered up the gay context, and accused Oscar voters of homophobia when the film lost to Crash.

You wouldn't think re-teaming the star and director of Splash could cause a theological uproar. Vatican officials called for a boycott of the movie, saying it was "full of calumnies, offenses, and historical and theological errors." Protests were staged in Greece, South Korea, the Philippines, India and the U.S. Still, the movie made enough to bring back Hanks and Howard for next summer's sequel, Angels & Demons.