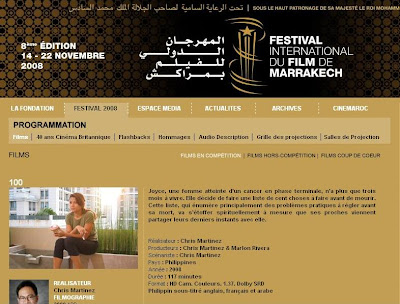 After bagging the Audience Award in the 13th Pusan International Film Festival (South Korea) and being chosen as one of the competing films for the 8th Marrakech Film Festival (Morocco), “100” finally lands a commercial run on selected cinemas on December 3.

“100” chronicles the remaining days of a terminally ill woman (played by Mylene Dizon) and the things she wants to do before she dies. But unlike other films that deal with death, Director/Screenwriter Chris Martinez shunned away from melodrama and peppered each scene with jest and humor with the help of comediennes Eugene Domingo and Tessie Tomas.

If there’s one Filipino film that you need to see this year, let “100” be that movie. This is an indie film so accessible that virtually everyone, from art film aficionados to ‘masa’ moviegoers, will enjoy. Catch it at Robinsons Movieworld starting on December 3.

Btw, this is not a press release. I’ve decided to write this blog because I love this film to bits. In fact, I’m bringing my family to watch it, even though I’ve already seen it last July during Cinemalaya.