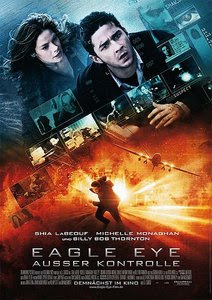 Sci-fi movies are characterized by stirring plausible plotlines in a microcosm of unreal settings. But a good science fiction does not only blend these elements to perfection, it also blurs these distinctions to make the audience question the very nature of the genre: is this just a sci-fi film or a premonition of what will become of reality? As moviegoers, we do not ask sci-fi movies to be realistic but they should be believable at the very least – that beneath the oddities is a concrete, seemingly imminent possibility well articulated by the film. Unfortunately, “Eagle Eye” must have shunned this idea and came up with an utterly illogical and unbelievable sci-fi flick that only holds water in the terrorism and artificial intelligence department.
After discovering that his bank account is mysteriously filled with $750,000, Jerry Shaw (Shia LaBeouf of “Transformers”) finds his apartment crammed with guns, ammonium nitrate, and all sorts of military weapons. He then receives an anonymous phone call telling him that the FBI will arrive shortly. They did and he got arrested. Meanwhile, a single mom named Rachel Holloman (Michelle Monaghan of “Gone Baby Gone”) also receives a phone call from the same woman who demands her blind obedience to her bidding in exchange of her son’s safety. Soon enough, Jerry and Rachel fumble through a series of tasks designed by the omniscient woman. We take thrill in the action and in the suspense of not knowing what is happening to the two leads and why this is happening. But as soon as the mysterious woman reveals her identity and her motives, we couldn’t help but lose interest.
Although undeniably action-packed and exciting, this DJ Caruso (“Disturbia”) directed film leaves us with far too many questions. Questions that dwell on plot holes, thus merely serving to heighten our dislike and disbelief to the material.

i got pass the criticism about eagle eye doing all those crazy shit. ultimately, i realized that the real essence (or message) of the movie is that technology is slowly catching up, and what has been a slave, now becomes the master. Caruso blows Shia off set. =)

Point taken. But I'm still benchmarking on the likes of great sci-fi movies like "Minority Report" and "Blade Runner". "Eagle Eye" just failed to measure up to expectations.