If someone told me two years ago that I will see 62 Filipino films in a year’s time, I would have laughed at that person for giving me too much credit. Heck, I don’t even think that there are 62 Pinoy films produced in a year. Writing for PEP (Philippine Entertainment Portal) allowed me to rediscover Philippine cinema. Not only do I watch Filipino films on a regular basis, I’ve seen more Filipino films that anyone I know. Likewise, I’m surprised how I became an advocate of Pinoy indies.

It’s easy to assume that most Pinoy indies are made with a target audience in mind–foreign critics and festival-goers. Though indie filmmakers will rise to the defense that they are merely telling our country’s stories, the exploitative use of poverty makes this claim dubious. Peddling the country’s third world plights as exotic filmic delicacy proliferates the trade that is known as Philippine independent cinema.

I believe that Pinoy filmmakers have other stories to tell. Our stories are not confined within the gritty, impoverished miasma of Manila . Hence, the films I enjoyed this year are the light-hearted fare. I realized that it is not imperative for a film with a strong message to be depressing or melodramatic. Comedies and romcoms can be just as strong as their darker counterparts.

Philippine film festivals are still the main source of quality films. Let’s take a look at the notable filmfests this year.

My list last year was dominated by Cinemalaya entries. I wish I could say the same this year. Honestly, I thought the 2010 edition of Cinemalaya was a letdown. Cinemalaya is becoming what Star Cinema is to mainstream movies: a factory of films made from the same mold. The films are slowly becoming too identical to tell apart.

The more interesting films belong to the sidebar section. From the NETPAC competition, Ang Mundo sa Panahon ng Bato and Sheika fared better. Mes de Guzman’s Ang Mundo sa Panahon ng Bato is a soul-crushing portrait of a man hardened by greed. He exploits kids, including his own siblings, to raise money. It leaves us with an indelible last image and a feeling of dread that is difficult to shake off. Arnel Mardoquio’s Sheika is as soul-crushing, but for different reasons. A woman, together with her two sons, runs away from the war in Mindanao but finds herself in a war bigger than she could ever handle. 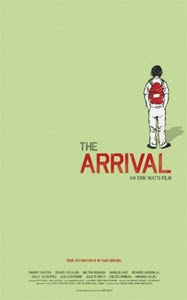 Screened as exhibition film is Erik Matti’s The Arrival. It was only shown once and I am glad that I was able to catch it. It is the only film that I saw this year that made me smile from the first scene till the time I left the moviehouse. It is a coming-of-age film of a 40-year old. The main character leaves his unrewarding job and his unappreciative dinking buddies to start a new life in a rural town. He left everything behind on a whim, but he eventually finds his happiness. It’s simple, delicate, and heartfelt. I didn’t know this type of films is still being made in this country. Hands down, the best film of the year.

Cinema One Originals has outdone itself. With only seven grantees (versus 15 of Cinemalaya), the indie filmfest produced three great films this year: Richard Somes’s Ishmael (about an ex-convict ready to bring down a cult leader), Michael Angelo Dagñalan’s Layang Bilanggo (a prisoner-for-hire who checks in at a retirement home to be close to his estranged daughter), and Remton Siega Zuasola’s Ang Damgo ni Eleuteria (a mail-to-order bride bound for Germany to help his impoverished family).

While it’s easier to depict the country’s ills as an overwrought melodrama (Noy, I’m looking at you), Zuasola finds a better way–through a comedy. It’s as biting, sans the bitter aftertaste. Ang Damgo ni Eleuteria is a funny, authentic, and well-crafted film.

Despite its modest run this year, I still consider Cinemanila as the must-not-miss film festival in the Philippines . It does not only showcase homegrown talents, there are also plenty of internationally acclaimed films on display. Due to limited screenings, I didn’t see much of the featured local talents. But from what I saw, Monster Jimenez’s Kano is nothing like anything I’ve seen this year.

I don’t watch documentaries. I find them boring. I have this belief that documentaries belong to late-night TV and not on the big screen. But Kano changed my mind. It’s about Victor Pearson who was charged of adultery by over a hundred women. It’s easy to antagonize Pearson, but Jimenez gives us an in-depth look on the man and the numerous women who are drawn to him. These colorful characters strike close to home. It’s painful to watch, a bit discomforting, and truly memorable.

MMFF used to showcase quality films. It’s such a shame that it evolved into a showcase of never-ending sequels and tasteless fantasy films. MMFF 2010 is no different from its predecessors, but it is surprising to note that one of the entries is tolerable. Actually, it is more than tolerable. Luis Suarez’s RPG: Metanoiastands above all the other entries. It is entertaining and funny, with its heart in the right place.

MMFF 2010 pays tribute to the robust independent film movement by creating a mini-filmfest to feature five independent films. I’m disappointed with the way they handled this supposedly sidebar competition because nobody saw any of the films. Why? Because the screenings are invitational and each film was only screened once. Luckily, I caught Rommel Sales’s Slow Fade–a charming and inventive indie with a mainstream appeal.

All of the films above, except for RPG: Metanoia, are independent films. While it’s still true that the independent film industry produces the best Pinoy films, there is still hope for mainstream cinema. 2009 was a bad year for the mainstream. Olivia Lamasan’s In My Life was the closest thing the mainstream had to quality filmmaking, but it was still miles away from the likes of Brillante Mendoza’s Kinatay and Francis Xavier Pasion’s Jay. Mainstream has been kinder to us this 2010 producing a riotous comedy (Chris Martinez’s Here Comes the Bride) and a political film wrapped in romcom goodness (Raul Jorolan’s The Red Shoes).

Philippine cinema is known for its unique stories, not much for its ambitions. So when a film like Chito Roño’s Emir gets made, I feel proud. It is an OFW drama. It is a musical with original songs and crazy choreography. And it is the most ambitious Filipino film made this decade.

For a list of all Pinoy films I’ve seen in 2010, go to this link. Curious to know which films I picked last year? Click here and here.

Lastly, let me give you my favorite acting performances. To view the long list, go here.

Runners-up (in order of preference):

Runners-up (in order of preference):

My choice for best actor and best actress are not big stars, which just shows that there are plenty of unknown actors who have been giving great performances in independent films. Hyde is fierce in Sheika. She goes from protective to vengeful mother in a bat of an eyelash. She is loving, broken, angst-ridden, and out of her mind. On the other hand, Gaston’s performance is filled with restraint. There are no John Lloyd moments where he is left to cry his heart out. Gaston doesn’t have John Lloyd’s killer looks, but he still managed to be adorable. This is a master class performance in subtlety and he nails it!

Last year, Baron Geisler and Irma Adlawan got my vote for best actor and best actress. See the rest of my picks here.

Finallyyy! :D Oohhh, The Red Shoes and Emir so high up. I know you like them a lot so good placing. I need to look for a The Arrival screening. Hopefully this Cinemalaya. Rekrut, really?? Haha kala ko joke lang yun. Didnt like this. Isang aspect lang nito gusto ko :) HAHA
Congraaats you finally finished!

Have yet to read the writeup pala :p

Thanks for the comment. I won't blame you for not reading. Ang haba nito. Nagulat din ako. Hopefully, I will be able to post my top 25 foreign films before Oscars. Kaya naman, basta walang write-up.

You should watch The Arrival. Enjoy siya panoorin at magaan sa damdamin. = )

Hi Fidel, I made a compilation of lists of 2010 top Pinoy films and I included yours. I posted it in our blog here: http://threetimezones.wordpress.com/2011/04/16/ten-best-reviewed-filipino-films-of-2010/.

Hi Skilty. Thanks for including my picks on your compilation.