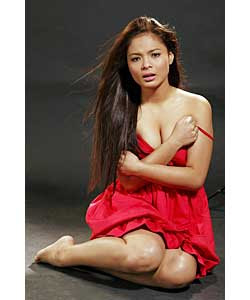 During the heyday of soap operas, the boob tube was filled with numerous sympathy-begging characters: Mara (Judy Ann Santos) and Flordeluna (Janice de Belen) to name a few. Their greatest strength and weakness is their exaggeratedly good heart. They are patient and kind and loving. They turn over the other cheek when attacked by the antagonists.

We root for them. We cry with them at times of great ordeal. And sometimes, we wish we could slap them in the face so they would wake up from their incurable martyrdom. That era of martyr heroines has long been gone… or so it seems. Now that Filipinos are slowly retiring fantaseryes and Koreanovela remakes, soap operas are making a comeback not only on TV but also on the big screen.

Director Joel Lamangan’s latest independent film, Sagrada Familia (his follow-up to Dukot, Fuschia, and Walang Kawala), adapts the soap opera formula for the silverscreen. It is composed of equal parts of melodrama and tragedy, complete with long suffering protagonists and a downright evil antagonist (the male equivalent of Princess Punzalan’s Selina from Mula Sa Puso). The film may please diehard fans of soap operas, but more progressive viewers are likely to find it passé.

Sagrada Familia tells the story of a family that falls apart because of a tyrannical patriarch. When Merle (Snooky Serna) leaves for Naples to work as a nurse, she leaves her daughter Kat (Lovi Poe) under the custody of her overprotective husband Johnny (Emilio Garcia) and consenting mother-in-law Carmen (Gloria Diaz). After Johnny finds out that her daughter is seeing a boy, he suddenly goes berserk. Kat soon finds herself physical maltreated and sexual abused.

When Merle decides to come home, she discovers that her family has gone missing. She searches high and low to know her family’s whereabouts. But when she finally finds them, she is faced with a truth that is too hard to swallow.

The script, penned by Racquel Villavicencio (award-winning writer of classics Ikaw Pa Lang Ang Minahal, Alpha Kappa Omega Batch ’81, and Kisapmata), is a little extreme compared to your average primetime soap in its inclusion of hefty servings of violence and incest in the storyline. But other than that, the requisite elements are all in place: camp, sentimentality, and hearty melodrama.

The script’s fatal flaws are its lack of logic and an inconsistent characterization. For example, when Johnny finally reveals his true colors to Merle, Carmen tells her that Johnny has suddenly become violent since she went away. From the get-go, it has already been established that Johnny is violent. The very first scene shows Johnny beating up a young Kat for dirtying his security guard uniform. And then, he accidentally kills his father when the latter whips him. So did Johnny suddenly become violent? Or is he inherently violent?

Another example, when Kat confesses to Merle that she is raped by Johnny, Merle calls her names and blames her for seducing her father. Merle’s reaction is out of character. It doesn’t make sense, since she knows how good of a daughter Kat is. In fact, Kat is a consistent honor student and a loving daughter.

Lamangan’s direction shares the same distaste for melodrama as ’s script. The film is replete with hysterical acting, buckets of tears, and clumsy dialogue. Like the director’s other films, the score remains to be a concern. It’s as if Lamangan doesn’t trust his scenes to be dramatic enough that he has to amp up the musical score several decibels higher.

Like your favorite soap opera, Sagrada Familia ends with a climactic shootout: a police intervention that’s a little too late. We’ve seen this ending before on the television. It’s sad that they have to recycle it for the big screen.

Hello there. Where did you see this movie?

I saw it in Robinsons Galleria. There was a one-day special screening.

what can you expect, it's a joel lamangan film.