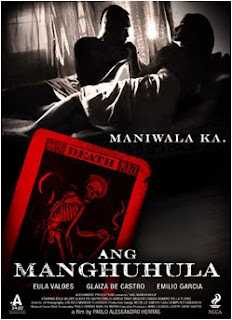 It’s weird how the film industry works. Manghuhula gets the chance to be distributed in mainstream theatres a year after its run in the Digital Lokal section of the Cinemanila International Film Festival. It’s weird not because it took them a year to show us the film, but because among the competing films, this gravely inferior film made it to our cinemas.

Manghuhula tells the story of an outcast fortuneteller who returns to her hometown only to find her daughter being groomed to be the town’s next fortuneteller, a fate she ran away from.
Manghuhula is a mess. With numerous missteps in direction and editing, the drama largely feels flat and unaffecting. The ineffective editing doesn’t make the scenes flow seamlessly to the next. Peek into the future, I’m sure you won’t see Manghuhula receiving any compliments.

How did this film rate an "A" with the CEB?! Shouldn't there be a Senate investigation into the ineptness of the Cinema Evaluation Board?? Too many inferior films are getting rated A's when more deserving films are being totally ignored by either being given a lesser rating or even worse, not being awarded a rating at all! The CEB is pretty brazen in its shamelessness and bias. Please write an investigative article on the matter. This truly smells of corruption and industry cronyism.

Same question I have in mind when I heard that Gil Portes' Pitik-Bulag (which is probably one of the worst, if not the worst, film I've seen this year) was Rated A. I don't know if bias or corruption has something to do with this. Or maybe these people who make up the Cinema Evaluation Board simply don't have taste.

Wait a minute! Wasn't Pitik Bulag included in the list of possible Philippine entries to the Oscars by our very own Philippine Film Academy?! Wait a minute! What kind of an academy is this then?! Composed of the old retreads in that popular Police Academy movie franchise?! Because their tired routine sure reeks of BAD comedy, man! Fidel, write an incisive article about this sad, sad group for the PEP site PLEASE! ASAP! I heard that Star Cinema refrained from putting the "B" rating they got from the CEB in their posters! Way to go, Tita Malou! Maybe pitik bulag is their team motto rather than the title of that awful film??

I think most of the films that received an A rating from CEB were considered by FAP in their Oscar shortlist. The local film industry is finally making a comeback, but it's disheartening to see that these institutions that are supposed to give merit to outstanding films are not credible.

Regarding the article, I will suggest that to the PEP editors. But I can't write an investigative article any time soon as I am swamped with work.