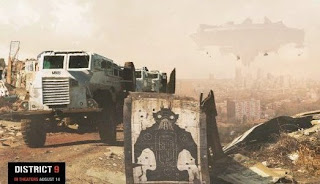 The film was slapped with an R-18 rating in the US. In an attempt of the local distributor to show the film to a wider audience, the film went through the cutting room. With a few cuts and bleeps, the rating is now down to PG-13. This means that the version we are seeing on our theatres is already ‘sterilized’, but that shouldn’t bother you at the very least. Regardless of the aforementioned, District 9 still turned out to be a wildly immersive and highly original science fiction.

You can view District 9 on two levels – as an intense and affecting gore fest or as socio-political commentary. This film is so intense that you will be at the edge of your seat, waiting in anticipation and cowering in fear due to the crass brutality unfurling. You’ll see nails falling off from one’s hand, cat food being eaten by a man, cross-racial prostitution (in other words: aliens fucking earthlings), human bodies hacked to pieces by aliens, etc. Despite the larger-than-life setups and situations, the story hasn’t lost its ability to emotionally connect with the audience. With the impeccable characterization of Wikus, his wife, and the father and son prawns, it is inevitable not to be moved. A feat not commonly achieved by the majority of sci-fi movies.

On a more subliminal level, Blomkamp throws allegory to apartheid. If you’re just like me who’s stuck in daydream mode back in my World History class, apartheid is the system of legal racial segregation enforced by the National Party government in South Africa. He also shows us man’s greed for power and authority. Man is depicted as savages, more savages than any of the prawn-looking aliens in this film.

District 9 can be enjoyed either as a popcorn flick or as a deeper study of man’s humanity. With the interspersed quasi-doc clips, CCTV footage, and interviews, here’s an absorbing film with great CGI and an even greater narrative.

TAGLINE: You are not welcome here.

THE GIST: When an extraterrestrial vessel hovered above Johannesburg, the government broke in and discovered a million prawn-like aliens inside. They contained the prawns in a slum called District 9 where humans and aliens grew hostile against each other.

POP MATTERS SAYS: By avoiding the typical end of the world apocalypse that most alien invasion movies mandate, District 9 becomes that most elusive of science fiction films – a serious and thoughtful dissertation of who we really are.

I actually notice that the film has an inconsistency on the use of the 'surveillance footage effects' and also the journalese effects. Otherwise, it would make a better movie. Mise en scene was not so defined either. Though, i really like the effects.

On the contrary, I liked the 'inconsistency' of the use of CTV footages and news reports. It gave us a better understanding of what happened in the past twenty years using different points of view.