1. Wall-E
Most smart filmmakers want to parade their facility with all the tools in the modern movie box. Andrew Stanton, the director and cowriter of the Pixar animated feature WALL-E, experimented with what talking pictures could plausibly do without. Talking, for example: the first third of the movie has almost no dialogue. How about depriving the two main characters — the humble, lonely trash compacter WALL-E and his space princess EVE — of emotional signifiers like a mouth, eyebrows, shoulders, elbows? Yet with all the limitations he imposed on himself and his robot stars, Stanton still connected with a huge audience. Great science-fiction love stories (there aren't many) will do that. So will futurist adventures that evoke the splendor of the movie past. A dirt-of-the-earth guy hooking up with the ultimate ethereal gal, WALL-E and EVE could be the 29th century version of Tracy and Hepburn, or Seth Rogen and any attractive woman. It hardly matters that the movie is not-quite-silent, when it blends art and heart as spectacularly as WALL-E does. 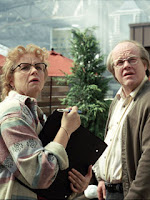 2. Synecdoche, New York
Ambition. That's what most independent films lack, and what the directorial debut of screenwriter Charlie Kaufman has, ad infintum, ad gloriam. It's an epic tragicomedy about Caden Cotard (Philip Seymour Hoffman), a Schenectady, N.Y., theater director who moves to Manhattan with the gigantic notion of putting on a realistic drama as big as all New York City. A self-styled truth-teller (his full name anagrams to Acted Candor), Caden manages to exasperate or repel the fascinating women (including Catherine Keener, Jennifer Jason Leigh and Michelle Williams) who cross his downward path. The project drags on — it's his life's work, and it may take that long to finish — but Kaufman's imagination never falters. The movie keeps getting bigger and weirder and denser and sadder and finnier, till all the pressure on Caden leads to a final implosion. A movie so human you'll want to argue with it, spank it, take it home or give it some Xanax, Synecdoche is the richest, most devious — I'll cut to the chase and say best — live-action film of the year.

3. My Winnipeg
In 1942 the city of Winnipeg held an "If Day," dressing its burghers up as Nazis to show the locals some of the terrors of life under the Third Reich. For Canadian deranged-genius filmmaker Guy Maddin, every day is an If Day: his movies transform his hometown reality into comedy-dramas of sibling rivalry and family life that would give Freud the creeps. So Maddin is not the most reliable reporter. In spite or because of that, My Winnipeg is a trip: a "docufantasia" that mixes the city's history with Maddin family values. He moves back into the home where he grew up, hiring actors to play his relatives — including Ann Savage, the notorious harridan of the 1945 cheapo-noir classic Detour, as his mom. Filming in black-and-white, streaking the frame, explaining the action with silent-movie intertitles, Maddin must want us to understand that, in movies, nothing is real, and everything is true. Oh, and My Winnipeg: it's weird-hilarious.

4. 4 Months, 3 Weeks, and 2 Days
In Romania under the Ceausescu regime, abortion was banned, and within 20 years some half a million women had died from having botched illegal abortions. This severe thriller from writer-director Christian Mungiu focuses on Gabita (Laura Vasiliu), a pregnant college student, and her friend Otilia (Anamaria Marinca), who finds a man who'll do the job: a quietly thuggish fellow who calls himself Mr. Bebe (Vlad Ivanov). Remorseless long takes build the suspense as the young women secure a hotel room and, when Bebe explains how they'll have to pay, question whether it's worth the price. Strap yourself in for this minimalist, splendidly acted horror film — and count your blessings that you live in a country where choosing an abortion doesn't mean losing a life. 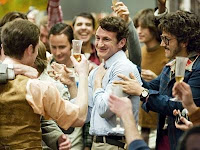 5. Milk
Affable and driven, Harvey Milk was a San Francisco politician who succeeded by inspiring crowds rather than making backroom deals. The country's first gay city supervisor, he used his energy and intelligence to help homosexuals secure civil rights. This exceptional docudrama — written by Darren Lance Black, directed by Gus Van Sant and starring Sean Penn — covers the last eight years of Milk's life, which ended when he was shot by fellow supervisor Dan White (Josh Brolin). Penn, who’s in nearly every scene, manages the neat trick of merging his star personality with the public figure well known from the 1984 documentary The Life and Times of Harvey Milk. Sunny, pushy and convincingly gay, Penn embodies a man hopeful for the future of his fellows but dreading what he believes is awaiting him. A how-to exercise in marshalling dozens of characters and one big political issue into exemplary, edifying entertainment, Milk is a must-see, right now. 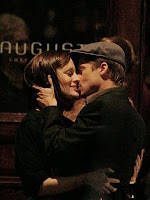 6. The Curious Case of Benjamin Button
"He was born old." That expression, referring to the prematurely middle-aged among us, must have been what spurred F. Scott Fitzgerald to create his puckish 1922 short story about Benjamin Button, who was born an old man and got a day younger every day. In this greatly expanded, much less frivolous film version, Benjamin's birth year is moved from 1860 to 1918; instead of fighting in the Spanish-American War, Benjamin sees action in World War II. What neither of those times possessed was the technological legerdemain that enables Brad Pitt to play Benjamin, through computer effects work (and old-fashioned makeup), for most of the character's long life. But the most satisfying tricks are performed by writers Eric Roth and Robin Swicord and director David Fincher. They give flesh and feelings to the essentially passive Benjamin and provide him with a willful, glamorous partner: the dancer Daisy (Cate Blanchett). Of all the movie's dazzling effects, the most special are the internal ones. Benjamin, a minority of one, can raise his resignation into wonder, and lift the viewer along with him.

7. Slumdog Millionaire
Who wants to be a millionaire? Not 18-year-old Jamal, though he'd like enough to live on, since he's been scrambling to survive since he and his brother Salim were brutally orphaned as children. But he's gone on a nationwide quiz show hoping that his brief celebrity will catch the attention of the ravishing, unlucky Latika, whom he's loved for most of his life. Simon Beaufoy's script tells the three lives in flashbacks that illuminate India's dynamic and troubled history over the past 15 years (though not, obviously, of the last few weeks). As gaudy wealth and abasing poverty coexist in Mumbai, so Danny Boyle's movie catches the contradictions of slum drama, love story, social document and Bollywood musical in its capacious embrace. With its nonstop pace and fearless dives into affairs of the heart, Slumdog Millionaire is a dervish delight. 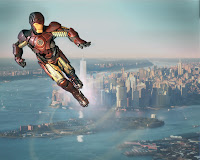 8. Iron Man
The weapons designed by arms manufacturer Tony Stark (Robert Downey, Jr.) are no sleeker, and his bombs no smarter, than the narrative lines of this marvelous Marvel Comics movie. A tin man who realizes that, if he is to become human, he must build himself a heart — and then a big red metallic airborne suit for buzzing unsuspecting planes and vanquishing his enemies. What a kick it is to see the thing fly. Same with the movie, for, like Tony, Iron Man is the perfect expression of Hollywood's engineering ingenuity. In an excellent year for action films (Wanted, Hellboy II, The Dark Knight and, as you'll soon see, Speed Racer), this was the coolest movie machine.

9. Speed Racer
Opening the week after Iron Man, the Wachowski brothers' race-car movie flopped at the box office. What can we say? Not every avant-garde FX masterpiece receives instant audience validation. This tale of a family of racers — Racer is the family name — exists simultaneously in the 1950s and today, in a live-action world and its own complementary alternate cyber-universe. Operating a pitch of delirious precision, the movie is a rich, cartoonish dream: non-stop Op art, and a triumph of virtual virtuosity. Maybe a lot of civilians didn't go see the picture, but you can bet it attracted the smart boys in Hollywood. They will pilfer its effects and, by next summer, produce a domesticated, more palatable version. My advice: Don't wait for the rip-offs; accept no substitutes. Speed Racer is the future of movies, on DVD now. 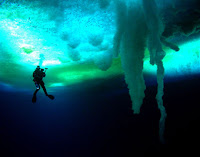 10. Encounters at the End of the World
If the German director-explorer Werner Herzog were to write an autobiography, this could be the title, for his 40 years of movies record his need to chronicle the lives of people as obsessed as he. The dramatic movies Aguirre the Wrath of God, Heart of Glass, Nosferatu the Vampire and Fitzcarraldo, and documentaries like The Great Ecstasy of Woodcarver Steiner, Grizzly Man and The White Diamond, are all about men with grand or deranged dreams, dizzied by the helium of their aspirations, which drives them to triumph or catastrophe. Even sane men, scientists in the remote clarity of Antarctica, have this intoxicating thirst. Encounters could be called a travelog: on a grant from the National Geographic Society, Herzog spent some time at the McMurdo Research Station, chatting up the scholars, technicians and workmen, following them on their expeditions across the ice and below it. Since Herzog has eyes as restless as they are acute, you'll see wonders here: active volcanoes, string band concerts, singing seals. The strangest, most affecting creatures are the men and women who've slipped down the modern world to end up here. They are adventurers, sometimes tearful with joy, and kindred souls to this great ecstatic filmmaker.

Huwhaaat?! Speed Racer is part of TIME's Top 10 Movies of 2008? Surely there must be some films out there more deserving than this movie...

Andy: I haven't seen "Speed Racer" so I don't wanna say anything bad about the movie despite the negative reviews I've read. Some movies work for some people, while some movies don't. Kanya-kanya lang yan. Like me, I still think "Wanted" is one of the best films of 2008 so far, despite its storyline pitfalls. (Shoot the wings of a fly? Come on. They can do better than that.)

Straycat: I've seen "4 Months, 3 Weeks, and 2 Days" and I didn't enjoy it. I think it is too slow. The shots are too static. Mas mabagal at mas static pa sa mga films ni Brillante Mendoza. But I think "Wall-E" is a good movie. It's cute and it has a social conscience.