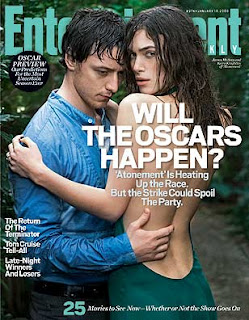 These are the words whispered by Cecilia (Keira Knightley) to Robbie when he was taken away from her. Such words are bestowed with greater emotional power in “Atonement”. This film is a story of love and detachment. But apparently, screenwriter Ian McEwan is not that simple-minded so he personifies the cause of the star-crossed lovers’ separation through Briony Tallis (Saoirse Ronan), the ‘fanciful’ younger sister of Cecilia who can’t get her nose out of Cecilia’s affair with Robbie. She soon tore them apart by deliberately testifying against Robbie for allegedly committing a crime. This change the course of their lives, including her own. What Briony has done seems pointless at first, until her real motivation subtly surge to the surface through the use of interspersed, non-linear flashbacks and repetition of scenes taken from varying points of view, which are utilized effectively although sparingly.

This beautifully crafted masterpiece is composed of well thought of scenes that are carefully executed to abide by director Joe Wright’s elaborate cinematic vision. This film sucks you into its core until you find yourself empathizing with the characters’ internal turmoil – the feeling of guilt that imprisons Briony even up to old age and the sense of longing of the estranged lovers for the presence of one another. Key scenarios are replete of palpable emotions intensified by the heartwrenching renditions of the three lead stars.

Another commendable factor is how the cinematographer masterfully commands the camera to unravel a sensory spectacle of captivating landscape, rich tapestry, and lush greenery during the first part of the film. And as it progresses, the cinematography takes a 360 to evoke the gloomy, somber feel of war. Aside from showcasing the magnificent setting, the cinematography also zooms in to burrow deep into the characters’ souls to reveal the personal conflicts they are going through. Also, the air of sexual tension thickens in a rather engaging manner. Watch out for the most passionate bookshelf love scene ever filmed.

The musical score is also noteworthy. The repetitive use of typewriter clicks make sense at the end when Briony decided to atone for the sin she caused by writing a novel that speaks of the unembellished truth behind the crime, although such act is already too late. No act of desperate repentance could ever bring Cecilia and Robby their happy ending; rather a heartbreaking finale is ensued that is sure to leave an indelible mark to the viewers’ hearts. 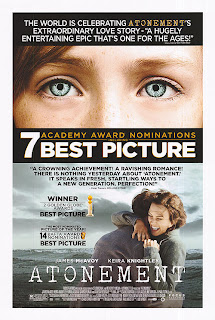 “Atonement” has made significant pre-Oscar buzz and has garnered accolades in the Golden Globes and BAFTA, now I completely understand why. This film is on a class of its own – an achievement in filmmaking that not even the Oscar Best Picture “No Country for Old Men” can ever beat.

Saw this in the cinema and bought the dvd soon afterwards. hehehe.
It actually gets better with every watch.

I've only seen it on DVD once, and it managed to blow me away. On my opinion, the best movie of 2007.

We're on the same page. I still don't understand how "No Country For Old Men" outdid "Atonement" in the Oscar race.