Noy and its two halves 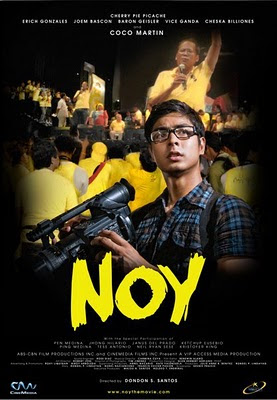 On May 10, millions of Filipinos lined up in polling precincts and endured the heat that is El Niño to participate in the first-ver automated Philippine elections. The son of a former president and an impeached former president were among the nine candidates who vied to become the next head of state. A sudden wave of nationalistic fervor and political enthusiasm permeated the atmosphere. Baller bands and twibbons (ribbons imposed on one’s Facebook or Twitter profile picture) of different colors were used to show support for voter’s presidentiable of choice.

Filipinos were suddenly talking about politics with renewed interest unseen and unheard of in recent years. It wouldn’t be too soon until the current political landscape is painted on the canvass of cinema, but I never thought it would be this soon. A mere three weeks after the national elections, a Star Cinema-distributed independent film on the subject of president-apparent Noynoy Aquino entitled Noy makes it way to the big screen.

But is Noy just cashing on the aforementioned sudden wave of nationalistic fervor and political enthusiasm? Is it just riding on the popularity of Noynoy, the man of the hour and soon-to-be main man of the country for six years? Here are my thoughts.


Noy is one half melodrama about a poor Pinoy family and one half mock documentary about Liberal Party’s standard bearer. On the melodrama half, we follow the struggles of Noy (Coco Martin) who takes on the padre de pamilya duties for his father-less family. Growing desperate to find means to support his kin, he applies as a journalist for a TV station despite his lack of credentials for the job. He nabs the position, all thanks to a counterfeit diploma. He is assigned to follow his namesake’s nationwide campaign and produce a documentary about it.

What little progress he makes in his career is abruptly negated by a series of unfortunate events. His girlfriend (Erich Gonzales) threatens to leave him, his mother (Cherry Pie Picache) is beaten up by the foreigner courting her, his invalid brother (Joem Bascon) peddles drugs, and his smart sister (Cheska Billiones) goes blind out of the blue. All these conflicts, which climaxed almost all at once, make the screenplay a tad ridiculous to be believable. That’s when this mopefest hits its lowest point.

To give us respite from Noy’s endless misery, actual footage taken from Noynoy’s campaign trail is interspersed between the dramatic scenes. These vignettes show Noynoy shoot political ads and rap campaign jingles. In addition, there are mock interviews between the two Noy’s as well as testimonials from Noynoy’s celebrity supporters (like Boy Abunda, Mariel Rodriguez, Claudine Barretto, Dingdong Dantes, Ai-Ai de las Alas, Ogie Alcasid, etc.). Unfortunately, these are neither insightful nor entertaining. All they do is distract the audience. It’s as if the mock documentary half is a mere marketing ploy to give Noy an edge over other indie weepies by trying to make it relevant.


But Noy is not without its share of merits. More than anything, the film is a showcase of good acting. Taking the exaggerated miseries aside, the dramatic scenes are undeniably potent. delivers the passion required of his breadwinner character. There are shades of angst, frustration, and a little hope. The supporting players, notably Cherry Pie and Joem, are also convincing in their roles. The tragic climax may be overwrought but is nonetheless beautifully orchestrated. The heart-pounding musical score, the powerful acting, and the seamless editing will bring audience to the brink of tears.

Flawed as it is, I prefer the melodrama half over the mock documentary half. Director Dondon Santos has a keen understanding of how to create dramatic tension. There is a balance between smaller, quieter moments and all-out, emotionally charged confrontations–yet both are equally capable of pushing the right buttons. If only the series of unfortunate events are trimmed down to a reasonable level, this could have been the potently dramatic (albeit realistic) film that it aims to be.