Miss You Like Crazy: The whole universe conspires for a happy ending 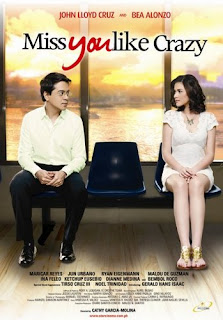 Most directors can only dream of carving their names in box office records. Some are fortunate to get one shot at doing so. While a selected few achieve a feat akin to capturing lightning in a bottle. Director Cathy Garcia-Molina is among these selected few. She directed three movies that became the top-grossing film of their respective years: One More Chance in 2007, A Very Special Love in 2008, and You Changed My Life in 2009. This year, Direk Cathy reunites John Lloyd Cruz and Bea Alonzo for the big screen. Can Miss You Like Crazy shatter the records set by its predecessors? After raking in P18 million pesos on its first day, the film is poised to be another commercial success. But does Miss You Like Crazy deserve your patronage? Here's my two cents.

Do you remember the sappy ballad It's Sad to Belong from the '80s? The song goes: "Oh it's sad to belong to someone else, when the right one comes along." Regardless of your love for each other, if it is not the right time, you will not end up in each other's arms. Truly, timing is vital in the game of love. But the writers of Miss You Like Crazy are more optimistic. They believe that if you are meant to be, the whole universe will conspire to bring you together. This concept prevails in this film as it moves mountains and defies logic in the name of romance.

Allan (John Lloyd) and Mia (Bea) are like star-crossed lovers. Fate throws them chances to be together, but time is not their ally. When they first meet on board the Pasig River Ferry, they are instantly attracted to each other. Both of them are from the middle-class and are down-to-earth. As they bond over Divisoria shopping and all-night conversations over coffee, Allan starts to doubt his feelings for his high maintenance fiancée Daphne (Maricar Reyes) who happens to be the daughter of his boss. If he breaks up with her, he will throw their three-year relationship down the drain and put his career in jeopardy. That is not a risk he is willing to take.

What if Allan and Mia meet on a different place at a different time, will everything fall into their rightful place? Two years after, the two cross paths again in where Mia works as a front desk officer. But this time, the tables are turned. Allan is single and Mia is in a relationship. He tries to reignite the flame, but she's been burned before. Besides, she has an obligation to her Malaysian boyfriend who helped make her family's situation better. Indeed, time is not their ally.

Star Cinema's weakness is its inability to produce a realistic ending. The studio's penchant for happy endings may please the general public, but more discriminating viewers are likely to be turned off. During the climax, the whole universe suddenly conspires to bring Allan and Mia back in each other's embrace. For hopeless romantics, this is a dream come true. But for realists like me, this perfect world only exists in fairy tales. In the real world, the more prevailing concepts are moving on and acceptance.

Put that aside and you get a pretty compelling love story. It may not top One More Chance as everyone's favorite Star Cinema romantic film, but Miss You Like Crazy has its own merits. The former popularized the killer lines "She had me at my worst. You had me at my best. But you chose to break my heart" and " ako na lang... ako na lang ulit." Miss You Like Crazy also has its fair share of quotable quotes such as:

John Lloyd is arguably the most talented actor in the mainstream today. He is an intelligent performer. He loses himself in every role. When Allan sees Mia for the first time in two years, we can sense the feeling of longing, joy, and desperation slowly creeping up his face. It is such a complex emotion that it takes greater understanding of the character to be delivered.

The supporting cast gives equally compelling performances. Maricar Reyes nails her character Daphne to the hilt. She is not exactly a bitch. She is just the way she is and is unapologetic about it. Maricar gets the best lines; most of them with dual meanings.

In addition, Bembol Roco plays Mia's paralyzed father. With no speaking lines, he is left to the aid of his facial expressions to convey repentance and sorrow. Ketchup Eusebio is charming as Mia's gay friend. Gay sidekicks are often used for comic relief. This is not an exception, but he equips his punch lines with enough sincerity. Meanwhile, Ina Feleo plays the other friend. (Paging ABS-CBN, give this two-time Cinemalaya Best Actress a break.)

There is a lot to love about Miss You Like Crazy—the story, the performances, and the second act shift. As with other Star Cinema films, the contrived ending will raise a couple of eyebrows. But overall, the film deserves the warm reception it has been getting. It seems nothing can stop Direk Cathy from dominating the box office again.

May not be as epic as One More Chance, but I agree, it should still be given merits. :)

If only Star Cinema would do away with that requisite happy ending. It destroys everything.