Aside from the Cinemanila Main Competition and Southeast Asian Competition that screen international films, there is the Digital Lokal section wherein six Filipino movies vie for the Grand Prize. Former recipients of this award, like Brillante Mendoza’s Manoro and Raya Martin’s Autohystoria, have been arthouse favorites but none has crossed over to the mainstream successfully. From the toast of homegrown talents that found their way to Cinemanila this year, Bona Fajardo’s Iliw and Jon Red’s Ang Beerhouse may have slim chances in clinching the top plum but at least they are commercially viable. Thanks to star power and mainstream appeal. 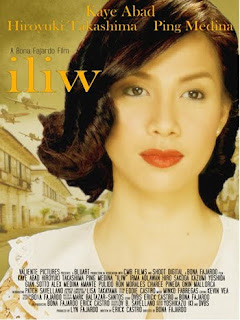 During the time of World War II, Fidela (Kaye Abad) and Colonel Takashi (Hiroyuki Takashima) find love in each other’s arms despite everyone’s disapproval. As the war comes to a close, Colonel Takahashi was ordered by the Japanese Imperial Army to destroy Vigan and make it uninhabitable. But because of his love for Fidela, he disobeyed his superiors and left the town unscathed.

As a non-English speaker, it must have been hard for Hiroyuki Takashima to communicate with his co-actors. But despite that, his charisma gave him strong screen presence. His chemistry with Kaye Abad is palpable. The rest of the cast includes Ping Medina as Fidela’s childhood sweetheart, Irma Adlawan and Amante Pulido as Fidela’s parents, Alex Medina as Fidela’s brother, Charee Pineda as Fidela’s friend, and Ron Morales as the leader of the guerilla movement.

Iliw wants to be an epic love story. It’s the classic tale of forbidden romance between warring nationalities. It’s an ambitious film, notwithstanding its limited resources. Dubbed as a film tourism project to promote the historic town of Vigan (a UNESCO World Heritage Site), the filmmakers manage to create something visually eloquent. They succeed in capturing the picturesque Spanish colonial town in all its glory.

However, the focal romance is not as compelling as it ought to be. The film’s narrative excess could have been trimmed down to make a more cohesive picture. Overall, it’s still refreshing to watch a period film that promotes the beauty and mystique of our national heritage. 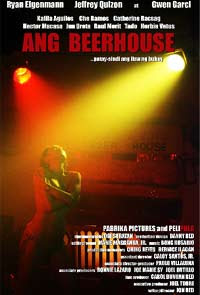 Noynoy (Ryan Eigenemann) and Brad (Hector Macaso) own a ‘business establishment’ fronting the Red Light Beerhouse. At first, they were already content peeping through the cabaret’s window to see the almost naked bodies dancing on stage until Jewel (Gwen Garci) caught Noynoy’s fancy. Noynoy soon becomes enamored with Jewel’s allure, but what he’s after is more than just a one night affair. He plays knight-in-shining-armor for Jewel’s damsel-in-distress. And so his mission begins: to save Jewel from the beerhouse.

Aside from Noynoy and Jewel, the rest of the characters in Ang Beerhouse are caricatures we’ve seen countless of times in comedies that precede it. We have the evil pimp, his dumb assistant, the dancer with a Visayan accent, the loud gay floor manager, and Brad, the protagonist’s sidekick whose command of the English language is as ‘suave’ as Jimmy Santos’.

There is a lot of talent in the cast. We get convincing but not over-the-top performances from Ryan Eigenmann, Epi Quizon (the money-hungry pimp), and Joel Torre (the hot-tempered beerhouse owner). But if I could single out one actor from the bunch, I would pick Hector Macaso hands down. With his comedic timing and hilarious delivery, he gives us enough reasons to laugh. Meanwhile, it’s a completely different story for the girls. Che Ramos, who had a magnificent turn in Jerrold Tarog’s Mangatyanan, was reduced to playing a vacuous character – a stripper who is always stoned. Gwen Garci, on the other hand, can play coy and cute but once the scenes demand her to display more emotions, she falls into a disaster.

Although the gag show antics are undeniably funny and some insights can be pretty clever, Ang Beerhouse amounts to nothing new in the end. But if all you need is a funny film you can watch with your buddies, then this film would gladly serve that purpose. You’ll roll in laughter whether you’re sober or not.