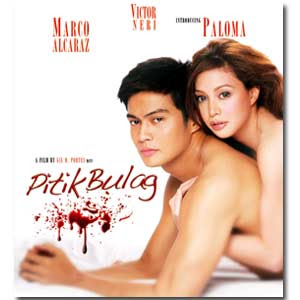 “Pitik-Bulag” marks the comeback of Gil Portes (“Mga Munting Tinig”, “Saranggola”) after a long hiatus in film directing. This film was Graded A by the Cinema Evaluation Board (CEB). A promising credential for a BAD movie.

To add insult to injury, the Movie and Television Review and Classification Board (MTRCB) approved this ‘sexy thriller’ without cuts despite an explicit woman-on-woman sex scene that wasn’t necessary to the script at all. What is wrong with you, people? A film like “Aurora” (megged by Adolf Alix Jr.) received an X-rating for a non-sensual rape scene between Rosanna Roces and Kristoffer King, while this got approved. You must be kidding me!

Aside from the titillating scenes, this film has nothing left to offer. Shallow story. Cheesy dialogue and equally cheesy delivery from leads Paloma and Marco Alcaraz. Wooden acting, with the exception of Victor Neri. Awful score. Dry screenplay thriving on poverty clichés and plain stupidity.
My word of advice: skip it! Not unless you believe that CEB has taste.