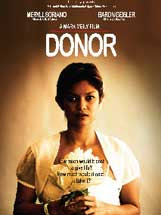 Donor seems cut out for that definition. The main protagonist, Lizette (played by Meryll Soriano), belongs to the bottom of the social rung. She tries to eke a living by selling pirated DVDs in Quiapo. After a raid, she loses her job and finds herself temporarily put behind bars. Along with other jailed vendors, they appeal to the police to let them go. They point out that selling pirated DVDs is better than prostitution, theft, or drug trafficking. There is a smidgen of truth in that statement. But should one settle for the lesser evil, instead of doing what is good? Is poverty an excuse to do bad deeds? Can values be compromised depending on one's social status? There are difficult questions that viewers will face while watching the "underprivileged" life depicted in Donor.

Going back to the story. A job abroad looks promising, but where will she get P20,000 as placement fee? Growing desperate to find money, she decides to take the offer of Busko (Jao Mapa) and Angie (Joy Viado) to sell her kidney to a Jordanian businessman, but here's the catch: she needs to marry him. Apparently, organ transplants between locals and foreigners are prohibited by law. Angie sees no problem with the deal. Anyway, that is just marriage on paper. She is willing to do anything to get her life on track. But will her live-in partner Danny (Baron Geisler) approve it?

Danny is a very unlikable character. He doesn't have a job. He wastes himself in alcohol everyday. He constantly asks for money for "emergencies". He doesn't seem to care about Lizette, her operation, or her marriage with the Jordanian. All he cares about is having a gun. I wonder why Lizette is still with him. She can just ditch him so she can live peacefully, but she just can't. I was initially wondering why Direk Mark wrote such an awful character, but everything made sense in the end.

Some may see the ending as an attempt to merely shock the audience and leave them with a sinking feeling. I, on the other hand, see it as a happy ending. Given that difficult decisions and sacrifices were made, Lizette is finally rewarded. There is justice in this world. In the end, her life is bound to get better because of perseverance and determination. 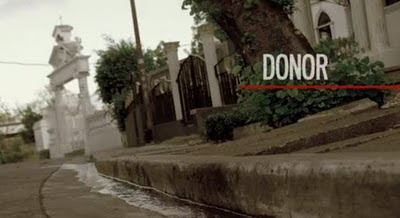 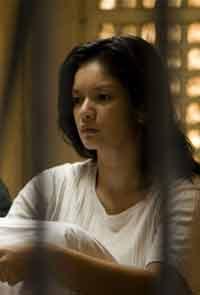 you got that one right on *apir!*