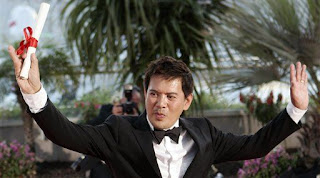 In what is touted by Variety as the “biggest heavyweight auteur smackdown in recent years”, Cannes did not fail to leave critics and everyone else in awe this year. This started with the announcement of the lineup featuring some of the most celebrated filmmakers in world cinema, followed by the 12-day screening bonanza that got critics throwing rants and raves over the likes of “Antichrist” (wherein people applaud, walked out, and even threw up), “Inglorious Basterds” (for not living up to the name of Quentin Tarantino’s first Cannes competing entry, “Pulp Fiction”), and “Kinatay” (named by Roger Ebert as the worst film in the history of Cannes Film Festival).

“Kinatay" follows 24 hours in the life of a trainee policeman. Together with his corrupt colleagues, they pick up a hooker. She was tortured, raped, killed, and was eventually hacked to pieces using blunt kitchen tools.

Sukhdev Sandhu of Telegraph UK calls the film: "a fiercely moral and horribly unforgettable denunciation of societal corruption." Meanwhile, Jay Weissberg of Variety says: "the graphic nature of the presentation is so coldly matter-of-fact and overtly in-your-face that auds are unlikely to feel anything other than anger at being subjected to such unnecessary scenes.” Aside from calling “Kinatay” Cannes’ worst, Ebert has this to say to the critics who sing praises to Mendoza: "There will be critics who fancy themselves theoreticians, who will defend this unbearable experience, and lecture those plebeians like me who missed the whole Idea. I will remain serene while my ignorance is excoriated. I am a human being with relatively reasonable tastes. And in that role, not in the role of film critic, I declare that there may not be ten people in the world who will buy a ticket to this movie and feel the money was well spent."

Despite it all, let us hold our judgment till we see the film ourselves. For the moment however, let’s celebrate Mendoza’s win and probable rise as the most controversial Filipino auteur.

The complete list of the 2009 Festival de Cannes winners is below: