For the past month, I’ve been trying to catch all of the critically acclaimed films of 2008 especially the Oscar and Golden Globes nominated films. Hence, the choice of my popcorn flicks. Most of the movies that I saw recently belong to that category, while some are older movies that I felt I needed to see before I write my Top 20 Films of the Year. Anyway, here is my movie log for the month:

THE READER
RATING: 2/5
DIRECTOR: Stephen Daldry (The Hours, Billy Elliot)
STARRING:
Kate Winslet (buttnaked half of the time)
David Kross (also buttnaked half of the time)
Ralph Fiennes (I know you don’t wanna see him buttnaked)
THEY SAY: Least favored among the five Oscar Best Picture nominees, but most favored in the Best Actress race. Winslet is Oscar bridesmaid no more.
I SAY: Promising first half until the plot reveals itself and all hopes crumble.

RACHEL GETTING MARRIED
RATING: 2/5
DIRECTOR: Jonathan Demme (Silence of the Lambs, The Manchurian Candidate)
STARRING:
Anne Hathaway (Oscar Best Actress nominee)
Rosemarie Dewitt (should have been nominated for Best Supporting Actress)
Debra Winger (good at punching people in the face)
Bill Irwin (sympathetic and loving dad)
THEY SAY: Outstanding screenplay from Jenny Lumet and intense performance from Hathaway.
I SAY: Shot as if the entire film is an episode of a reality show or a home video, this film is heart-warming and authentic but not good enough to be outstanding.

CHANGELING
RATING: 3/5
DIRECTOR: Clint Eastwood (Million Dollar Baby, Mystic River)
STARRING: Angelina Jolie (kick-ass mama sans the tattoos)
THEY SAY: A compelling and well-acted period thriller.
I SAY: It’s a bit long-playing with a little too many sub-plots, but it’s undeniable that the story is engrossing. 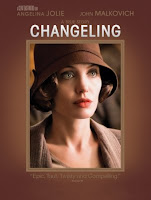 GRAN TORINO
Rating: 3/5
Director: Clint Eastwood (Flags of our Fathers, Letters From Iwo Jima)
Starring: Clint Eastwood (grumpy old man)
THEY SAY: Eastwood’s final performance in front of the camera deserves applause.
I SAY: I like it. I had fun watching it. But quite forgettable.

JAY
RATING: 4/5
DIRECTOR: Francis Xavier Pasion (directorial debut)
STARRING:
Baron Geisler (Cinemalaya 2008 Best Actor)
Coco Martin (didn’t take his clothes off this time)
THEY SAY: Cinemalaya 2008’s top film among other accolades.
I SAY: An interesting depiction of the way media fabricates the truth and an expose of the obsession of everyday Juan’s to 15 minutes of fame. 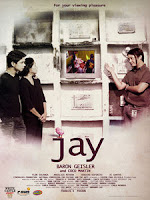 LET THE RIGHT ONE IN (LÅT DEN RÄTTE KOMMA IN)
RATING: 3/5
DIRECTOR: Tomas Alfredson (no idea what other movies he directed)
STARRING:
Kåre Hedebrant (bullied by classmates, in love with a vampire)
Lina Leandersson (12 years old for a long, long time)
THEY SAY: One of the best foreign films of 2008.
I SAY: Moody atmosphere, controlled pacing, and inexplicably charming.

IRON MAN
RATING: 3/5
Director: Jon Favreau (Zathura, Elf)
Starring:
Robert Downey Jr. (playboy millionaire)
Gwyneth Paltrow (foxy assistant)
Terrence Howard (and who the hell is he again?)
THEY SAY: 2008’s most explosive superhero movie after “The Dark Knight”.
I SAY: Not as good as everyone is saying. Why am I in the minority?

gawd. your reviews stink. rachel getting married not outstanding? the wrestler boring? ploning pretentious? what movie impresses you ba? house of wax?

To each his own. Go write your own blog then.

What movie impressed me? Requiem For a Dream, Atonement, Dancer in the Dark, etc.

Not because you like something, the whole world should agree with you.

atonement? that film was laughable. i'd rather watch the english patient anytime.

and yeah i agree with you that if you like something everyone should agree with you. to each his own d b? but my god? the wrestler? rachel getting married? unbelievable!

Well, that's you. And by the way, I didn't say "Rachel Getting Married" is a bad movie. But "Ploning" and "The Wrestler", a complete waste of MY time.