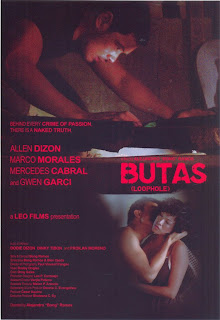 With the introduction of digital filmmaking in the country, it is now less costly to produce movies. Filipinos are warming up to the idea of indie films as more and more of these digital full-length features are produced each year. Not all makes it to our theatres though. Even the movies that have received accolades from the international film festival circuit are finding it hard to land distribution deals locally. Why? Because they don’t make enough money. A huge chunk of indie films that get the chance to be shown on cinemas are sexy movies. Could this be the renaissance of bold movies? Enamored by the belief that “sex sells”, some filmmakers exploit the digital medium to make a killing in the box office, thus giving indie films a bad name.

It is easy to classify “Butas (Loophole)” under the bold movie category. But unlike the bomba movies of the ‘90s, this film attempts to tell a multi-faceted story and employ an experimental narrative technique that veers away from mainstream norms.

Directed by Alejandro “Bong” Ramos (of the award-winning “Haw-Ang”), “Butas” introduces us to three characters whose lives are interlocked in a muddle of lust, treachery, and passion. Jake (Allen Dizon) finds out that his wife, Maya (Gwen Garci), is having an illicit affair with their neighbor, Virgo (Marco Morales). Jake secretly follows them in their rendezvous, seeing for himself how Virgo and Maya satiate each other’s carnal desire. A deafening shot is heard, thus sending Virgo to the floor to bathe in his own blood. According to Jake, he is responsible for the death of Virgo as he has planned to do so. However, a video footage retrieved from the crime scene provides infallible evidence that contradicts some details on Jake’s testimonial. Which version of the events can be trusted? The testimony of the suspected killer or the fragmented video footage?

The first act, Jake’s version of the events, feels like an extended monologue. We see him stalking Maya and Virgo, eavesdropping in their conversation, watching their erotic encounter by peeping through a hole from the ceiling, and crying incessantly on his own. For the entire time, we hear his voice-over narration as he verbalize in excruciating detail his angst and grief. This could have worked for the film’s benefit, but the first act was stretched heedlessly as the monologue went on and on, refusing to end. Moreover, the score made the scenes feel too staged. “Butas” could have opted for a more realist approach employing minimal score and relying on au naturel sound to build dramatic tension at the subliminal level.

Things get interesting in the second act. After the revelation that the first act is merely Jake’s side of the story as confided to his attorney, the latter shows him a video footage of the events leading to the crime. Employing a dizzying Blair Witch-esque cinematography, we participate in Maya and Virgo’s sexual deed as obsessive observers watching them through a peephole. It’s basically the same story as Jake’s but this version is grittier and more graphic. The video does not reveal the identity of Virgo’s killer, but it exposes a new angle to the mystery. A seemingly run-off-the-mill story of infidelity suddenly shifts gear to tackle something more alarming – sex voyeurism.

Aside from full frontal nudity, Gwen and Marco did not really offer much for the film. Gwen is consistently sloppy in her acting. She throws lines as if she is reciting poetry. The role demands her to be happy, angry, high, conscientious, and regretful at different circumstances, but Gwen doesn’t have the capacity to exhibit the inner conflicts of her character. She ends up wearing the same face all throughout the film. Meanwhile, Allen was left nothing to do but peep, walk aimlessly, and cry during the first act. But he soon redeemed himself by showing a range of emotions through his effective facial expressions that we never thought he is capable of showing before.

“Butas” stretches the fabric of truth to produce three versions of a single incident. Its efforts are generally paid off but with a little more editing on the first act and casting a more capable actress for the role of Maya, this material could have serious potential.

It's a Rashomon-Salome-Blairwitch project-Scorpio Nights movie rolled into one. If you've seen all these films, you will totally go with me. I agree with you, specially on the first part of the movie. While in the premiere last night, I was hoping people not to stand up and pretend to be just going to the rest room and totally dissappear from the event. Good thing people waited 'till the second part which really saved the film.
Good review. Keep it up!

I haven't seen all of those that you mentioned but I am familiar with the style used by those films. I agree that "Butas" strikes a resemblance with them - perhaps the filmmaker borrowed some of their elements or maybe the filmmaker was subconciosuly inspired by them.

I watched the film during the press screening at UP Film Institute Videotheque. Unlike Cine Adarna, Videotheque was rather small so you can hear everyone's side comments and see their reactions. I saw showbiz reporters who were yawning and even chit-chatting because they were bored by the first act of the film.

But I still think it's an OK film. It is flawed, yes, but there is at least an attempt to make something riveting.